Homosexuality has long been a hidden facet of Indian life and, until recently, an illegal one. But change is afoot. A Delhi High Court ruling in 2009 decriminalized same-sex intercourse, and sensitivity toward gay people and bisexuals is growing in major cities like Mumbai and New Delhi. The Hindustan Times, one of the country’s largest English-language newspapers, recently began a campaign called, “It is time to open our minds,” encouraging Indians to rethink social issues, including equal rights for gay people.

Now, businesses are beginning to recognize a new and possibly lucrative niche market. Stores aimed at a gay clientele are opening, and same-sex parties and clubs that had been required to stay underground are increasingly making their presence felt.

Redefining luxury and travel experience for LGBT community, we host exclusive destination packages and travel services for gays. Coming from a three-time winner of National Tourism Award, gaytravelindia.com is your ‘Know it all’ for all travel needs when planning a trip to India.

The website http://www.gaytravelindia.com state, Whether you’re a gay couple or in a small group; a fancy honeymoon trip or simply fascinated by the vibrant culture and cuisine of India; a much-anticipated visit to Taj Mahal or simply enjoying the luxury of Kerala beaches- our experts handpick every facility for you to create just the perfect vacation for you! Oh, and we also offer a visual treat to gay clubs, parties and events in India, just for you.

The customer base is potentially huge: surveys by Forbes India in conjunction with Out Now Consulting, a marketing firm, estimate that 4 percent of Indian adults, or about 30 million people, identify themselves as gay, bisexual or transgender.

India’s neighbor to the north, Nepal, has started to sell itself as an international gay tourist destination after that country’s Supreme Court legalized same-sex marriage in December 2007 and directed its government to formulate laws accordingly.

While legalizing same-sex nuptials in India may be a long way off, some tour operators say places like Goa and Kerala could easily be marketed as honeymoon spots for gay couples, as the states are already known for their beach party towns.

“Gay men have long been bypassing India for countries like Thailand and even Indonesia," said Sanjay Malhotra, a fashion designer who started his company, IndjaPink, in November 2008. It was the first travel agency in India to focus exclusively on gay men. 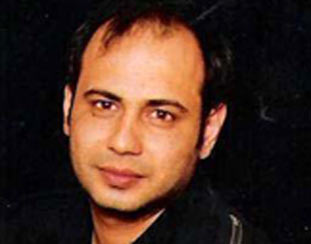 Mr. Malhotra said he felt it was a shame that gay Indian couples could not explore and enjoy their own country as openly as they could in other parts of the globe. He decided to form IndjaPink to give gay men a safe way to travel in India without having to hide who they were.

One of the biggest challenges in designing itineraries for gay travelers, Mr. Malhotra said, has been heightening the sensitivity of the hospitality industry. For example, despite being informed that a group of tourists is gay, the front desk staff at some hotels often seems determined to put same-sex couples in rooms with separate single beds.

On their website Injapink state Indjapinkis India’s first Travel Organization catering to MEN ONLY. Since its very inception,Indjapink has been providing customized luxury travels to every man or couple who wants to unravel the beauty and mystery of the exotic land of India. This majestic land is bristling with a mix of awe-inspiring landscape and varied cultural traditions. Your journey through this intoxicating country will blaze in your memory long after you have left it! At Indjapink, we make your travel as comfortable as it can be, urging you to be who you are – with an amazing friendly tour operations!

“It’s important that the staff not speak in hushed tones behind a guest’s back if he’s sharing a private moment with his partner or not stare at the couple in the rearview mirror if they’re holding hands in a taxi,” Mr. Malhotra said.

Sometimes, though, getting the message across can be difficult. “When I’ve had meetings with drivers and asked them if they’re comfortable being around gay people, I’ve had them turn around and tell me, ‘Yes, yes, sir, we’re all gay here too. Very happy and gay.”’

Outright harassment has never been a major problem for gay foreigners. As Mr. Herb said, “A lot of people in smaller villages have no idea that we are a gay group.”

But until the decriminalization, Mr. Malhotra said, gay Indians were the targets of corrupt policemen who used the threat of arrest to harass them or extort money.

“The gay issue doesn’t come up as long as you maintain your straight face,” he said. “But as soon as you show a bit of your gay side, you get a lot of unwanted attention, especially in smaller towns and off-beat tourist destinations.”

Gay travelers, both Indian and foreign, still find it hard to interact with the local gay community or learn more about being gay in India, because many people and events remain underground. But guides like IndjaPink are making it possible for tourists to go to same-sex parties and clubs to which they could not gain access otherwise.

The challenge to the gay sex law was brought by the Naz Foundation, which works to raise awareness of H.I.V. and AIDS. The statute, which defined homosexual acts as “carnal intercourse against the order of nature,” called for a 10-year prison sentence for violations.

In overturning the 148-year-old colonial law, the Delhi High Court said the measure was an “antithesis of the right to equality.”

The Supreme Court started to review the ruling in April, and observers are divided on whether it will be upheld. If it is, that could open new lines of business aimed at same-sex couples, like home loans and insurance.

Azaad Bazaar, a gift shop for gay people in Mumbai, opened last year, carrying items like mugs with rainbow motifs and shirts that say “Ban 377” — a reference to the penal code section on gay sex. Azaad means “free” in Hindi.

The two women behind the shop began their business in 2006, but for several years only sold small items at parties, and masks and flags at gay pride marches. New Delhi and several other cities in India have held gay pride parades for several years, though many participants hide their identities by wearing elaborate masks and costumes.

Before the ruling, Mr. Malhotra said, it felt as if there were a sword hanging over his head, and he never knew when it might strike. Few people were interested in knowing more about his business model or his clientele. But now, hotels and travel desks are much more open to hearing about their needs, he said, and he is less worried about being the target of the police or of being maligned in public.

“It has brought a sense of legitimacy,” he said.

Insight into a troubled ex admin secretly_curious Michael Kirby: the rainbow in Asia and the fight for gay rights in our region
Comments
Order by:
Per page: