An event pass to European Snow Pride grants access to all the skiing activities and parties during the week, which naturally includes apres-skis on the pistes and nightly DJ parties. One of the highlights is the Giant Pool Party at Tignes' nearly 54,000 square-foot (5,000 m2) Lagon, complete with pool, sauna, steam, hot tubs and inflatable toys.

TIGNES, THE GAY-FRIENDLY RESORT OF SPORTS

According to l’Equipe, France’s number one sport newspaper and magazine, Tignes is the sportiest town in France.

The resort hosting European Snow Pride since 2103 has not been chosen randomly. It is the result of a careful resort selection process taking account of gay people’s expectations and feedbacks and the capacity of the resort to host gay events.

Tigne’s repeated commitments towards the gay community definitely confirms its status of gay friendly resort attracting gay people from all around the world.

During the European Snow Pride, Val Claret will turn into a true gay village. All accommodation offered on our website as well as most of the events organised throughout the week are located in Val Claret. Accommodation and event venues are within walking distance of each other.
The European Snow Pride participants will find it very easy to meet each other, either in the village or at the different events as well as at the hotels and residences on the website.

It will take you less than 10 minutes by foot to go between 2 extreme points in Val Claret. Although you can drive through the village, going by foot is from far the most convenient way to go.
In case you need to go to Tignes le Lac, which is a little more than 1km away from Tignes Val Claret, you can walk along the lake. Unless you are in a hurry or do not fancy the bucolic walk along the lake, you can use the free public shuttle linking le Lac and Val Claret and running every 10 minutes during the day (every 30 minutes from 9.30 and every hour at certain moments of the night).

In the very unlikely situation where the numerous events organised throughout the week were not enough to you, you will find in Tignes Val Claret a large choice of restaurants and bars, 2 night clubs and 1 cinema. 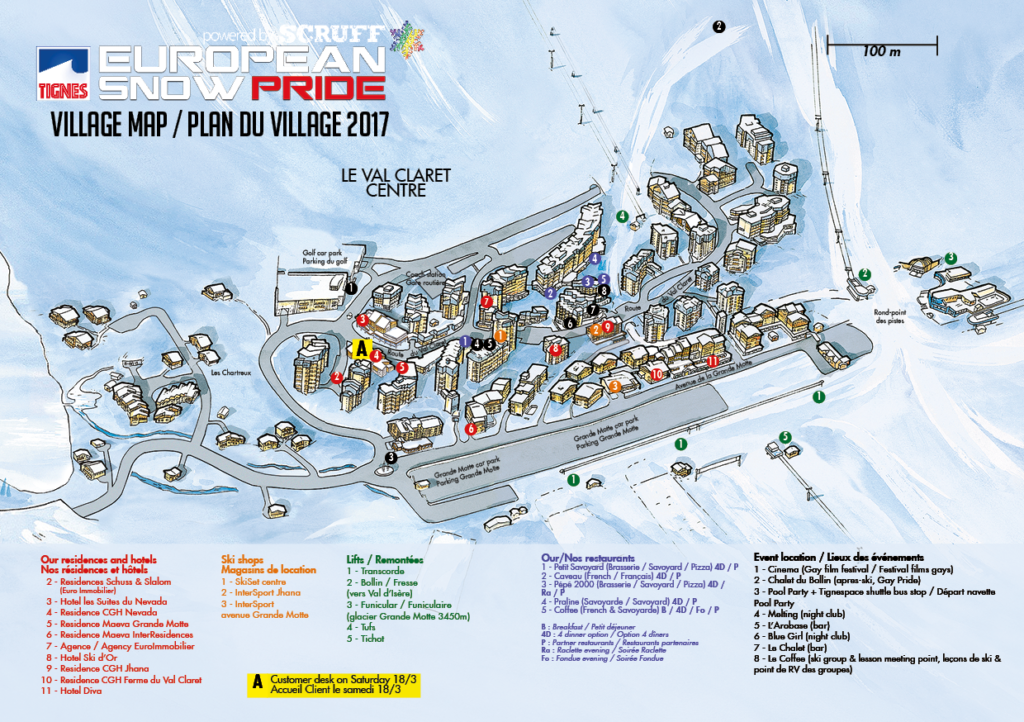