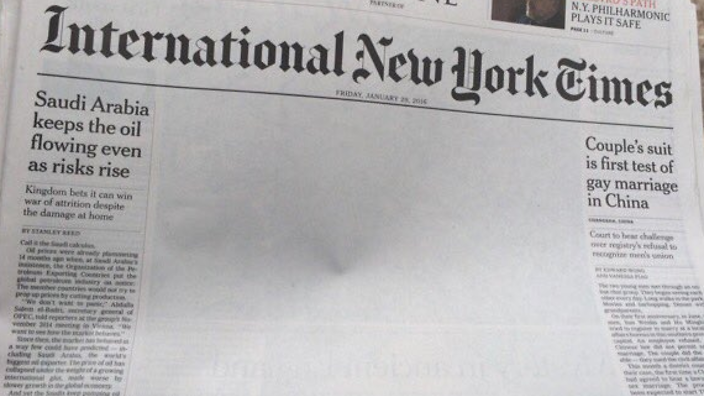 For the second time this month, Pakistan's Express Tribune, which partners with and publishes the international edition of the New York Times locally, censored a front-page article or photograph. Instead of running the photograph, New York Times subscribers in Pakistan woke up to find a huge blank space on their paper.

"This picture was removed by our publishing alliance in Pakistan," a caption stated below the 8-inch by 12-inch blank space. "The International New York Times and its editorial staff had no role in its removal."

The photograph was supposed to accompany a Times story, written by Edward Wong and Vanessa Piao, about a first-of-its kind lawsuit in China challenging that country's prohibition on same-sex marriage.

The story was published in Pakistan, but the photograph showing one of the plaintiffs with his arm on his boyfriend's shoulder while giving him a kiss was removed.

Kamal Siddiqi, editor of the Express Tribune, said his newspaper has a longstanding agreement with The New York Times that it can refuse to publish articles or photographs that "may cause problems locally."

Earlier this month, the Express Tribune also censured a New York Times article about attacks on progressive bloggers in Bangladesh. According to New York Times Public Editor Margaret Sullivan, the local printer decided readers may have found some quotes in the article blasphemous.

In 2014, the Express Tribune also censored a New York Times article about whether Pakistani intelligence officials may have known about Osama bin Laden's whereabouts before U.S. forces killed him in Abbottabad, Pakistan, in 2011.

"Even in the digital age, blank newspaper pages are a disturbing symbol of the lack of free expression in many parts of the world," Sullivan wrote.

In an email to a New York Times representative on Friday, Siddiqi defended his actions.

He noted Islamist militants and others have repeatedly targeted Pakistani journalists suspected of "pursuing a Western agenda," including an attack in 2014 that killed three Express-News journalists in Karachi.

"I am as much opposed to the censorship as you all are," Siddiqi wrote in the email, a copy of which was obtained by The Washington Post. "However, as editor of the Express Tribune, which has over 200 staffers and brings out editions in Karachi, Lahore, Islamabad and Peshawar, I am also mindful of the danger and the lives we can put at risk if we decide to print some of these articles."

The security of Pakistani's dogged journalist community is a major concern; at least 71 of its members have been killed here since 2001, according to the Pakistan Press Foundation. And in the past, violent mobs have formed to protest articles, cartoons or photographs that were interpreted as being an insult against Islam.

With Pakistan's government generally unable or unwilling to protect journalists from such fallout, Siddiqi said, many newspapers and television stations now resort to "self-censorship" to avoid attacks or blasphemy charges, which is punishable by death.

"I wish we could do a fraction of the work that the NYT does and we hold it as the standard to aspire towards," Siddiqi wrote. "But please understand that the on-ground reality is very different for us."

Despite being governed by a constitution that is based on Islamic law, Pakistan is generally known for being less rigid about homosexuality than other Muslim-dominated societies, including Iran and Saudi Arabia.

In 2011, Pakistan's Supreme Court officially recognized the country's transgender population, establishing a legally recognized "third gender" that now has the right to vote.

Homosexuality is still considered a crime here, but legal analysts say prosecutions for such offenses are rare.

In recent years, the BBC and other media outlets have aired stories about the country's gay communities in major cities such as Karachi and Lahore.

Some gay couples are now even living together, the BBC reported. Because unmarried young men rarely interact with women, and are known to be affectionate with each other, it's easy for gay couples to hide their sexuality, the BBC noted.

And Pakistani media outlets do at times cover issues related to homosexuality. Even as the Express Tribune censored the New York Times photo of the Chinese couple, it published a story in its local editions on Friday noting three prominent Bollywood actors had agreed to play gay characters in an upcoming film.

Still, a robust public debate about gay rights or same-sex marriage is unlikely to occur in Pakistan anytime soon.

In March, Pakistan joined 42 other nations at the United Nations in voting against granting benefits to same-sex couples who work for the world body. In 2014, Pakistan was one of just 14 nations to oppose a U.N. resolution expressing "grave concern" over the rights of gay, lesbian and transgender people around the globe.

In June, two Pakistani men near the eastern city of Quetta were arrested after rumors circulated that they had gotten married in a wedding ceremony. The men faced up to life in prison.

But they argued the wedding had been a joke, and all chargers were later dropped, according to a local journalist familiar with the matter.