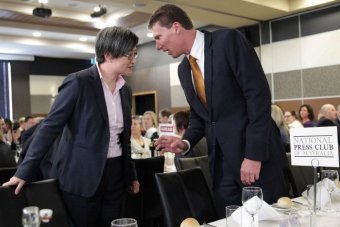 The Australian Safe Schools education program is set to be reviewed following fierce criticism from some Coalition backbenchers.

According to its website, the Safe Schools Coalition offers resources and support to equip staff and students with "skills, practical ideas and greater confidence" to create a safe and inclusive environment for same-sex attracted, intersex and gender diverse students, staff and families.

But some Australian Coalition MPs have been agitating against the program, saying it raises sexual issues which are inappropriate for teenagers and young children.

Australian Education Minister Simon Birmingham has written to state and territory education ministers, asking them to confirm that parents are being consulted before schools introduce the scheme.

The review of the program's material and its use is expected to be completed by mid-March, little more than a year before its funding agreement with the Commonwealth expires.

In a statement, Senator Birmingham said homophobia "should be no more tolerated than racism, especially in the school environment".

"However, it is essential that all material is age appropriate and that parents have confidence in any resources used in a school to support the right of all students, staff and families to feel safe at school," he said.

Senator Cory Bernardi told the ABC the program was seeing children "being bullied and intimidated into complying with a radical program".

Senator Bernardi has called on the Australian Government to withdraw funding for the program.

"It makes everyone fall into line with a political agenda.

"Our schools should be places of learning, not indoctrination."

The program's federal funding was allocated by the Labor government in 2013, when an $8 million investment was announced for the program convenor, Foundation for Young Australians.

It also receives some state funding, with the Victorian Government allocating $1.04 million in its 2015-16 budget.

Safe Schools Coalition Australia's Government website described the program as the first "funded by the Australian Government, aimed at creating safe and supportive school environments for same-sex attracted, intersex and gender diverse people by reducing homophobic and transphobic bullying and discrimination in schools".

In a statement, the national program director for the Safe Schools Coalition, Sally Richardson, said almost 500 schools had opted into the program and more than 15,000 teachers accessed its tools.

"Safe Schools Coalition Australia welcomes all opportunities to demonstrate the positive impact of this important program and provide the facts and evidence behind it," she said.

"This program was developed in response to requests from Australian teachers and principals looking for advice and resources to better support the diversity and wellbeing of their students and create safe learning environments."

Government had said program was 'right thing to do'

Opposition Leader Bill Shorten said it was "disgraceful that an Australian child may fall victim to Malcolm Turnbull’s failure to stand up to the right wing of his party".

"Life is already difficult enough for young people — they shouldn't have to put up with the added stress of bullying and intimidation in the schoolyard," he said in a statement.

Labor senator Penny Wong, who was among those who announced the initial funding, dismissed criticisms that the program was ideological.

"We all want our children to be safe and this is a program about that," she said.

"Let's hope that the more sensible people in the Liberal Party will continue to focusing that objective."

Victorian Premier Daniel Andrews, whose home state first developed the program in 2010, said he was "sick of Liberal politicians telling our kids that there's something wrong with them".

"Let's be honest here: I don't think these extreme Liberals are actually offended by the structure of the program, or the teachers who lead it. I just think they're offended by the kids who need it," he said in a Facebook post.