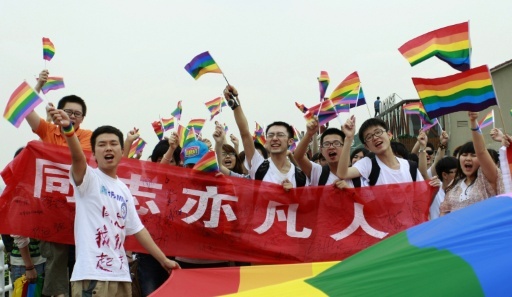 "Addiction" -- a 15-episode series about love between two teenage boys -- cannot be broadcast on the video app of Xiaomi smartphones, a search by AFP showed.

The drama, which made its debut in late January and has had 12 episodes aired, became unavailable on various sites including v.qq.com and iqiyi.com on Monday, said the Global Times, which is closely linked to the People's Daily, the Communist Party's mouthpiece.

"There's no reason. It's a result of the broader environment," said the writer and producer of the series, who uses the pen name Chaijidan, news portal ifeng.com reported Tuesday.

Communist authorities maintain a tight grip on broadcast, print and online media, while restricting access to foreign websites with a vast control network dubbed the Great Firewall of China.

The country only decriminalised homosexuality in 1997, but conservative attitudes remain widespread and discrimination is common, although tolerance is greater in major cities.

A film with gay principal characters was approved for cinema release last year, its director said, calling it a big step forward, but it has yet to be seen on the big screen.

Beijing's powerful State Administration of Press, Publication, Radio, Film and Television (SAPPRFT) has never published a list of what can or cannot be broached.

But negative portrayals of contemporary politics are often banned, as are content that might be deemed morally "unhealthy" and issues that authorities believe could lead to social unrest.

While there has been no official announcement of Addiction's blocking, the Global Times said Chinese Internet users speculated that its gay themes and sexually explicit dialogue might be the cause.

In an online poll by the Chengdu Committee for the Well-being of Youth and Teenagers, a government-backed social organisation, more than 93 percent of the 20,000 respondents disapproved of the removal.

"The SAPPRFT (decision) is too much. Is it necessary? It's so unpopular," said a user on China's Twitter-like Weibo.

The blocking is the latest disappearance of an online show, after a drama with transgender elements, "Go Princess Go".

That series depicted a man who travelled back in time -- itself an officially banned theme -- to take over the body of a princess, at first flirting with other women before falling in love with a prince.

Its executive producer Gan Wei said its makers took the initiative to remove it after "considering advice from various parties", according to previous Chinese media reports.

Chaijidan said shooting for Addiction's second season would "not be impacted" by the ban and was likely to start in May.

Some users blamed the ban on the series' own marketing, which played up the deletion of revealing scenes, while the first names of the two leading characters meant "heroin" if combined.

"When the producers chose such a marketing line, they were absolutely prepared to have the drama taken down," wrote one Weibo user who said he was gay himself.