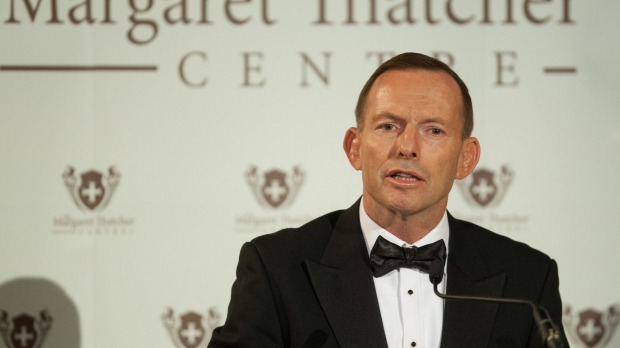 Former Australian prime minister Tony Abbott has told a conservative Christian group in the United States that allowing same-sex couples to wed will contribute to "the erosion of family", a stance that drew a swift rebuke from his openly gay sister Christine Forster.

Fairfax Media revealed this week that Mr Abbott would travel to New York to speak on "the importance of family" to the far right Alliance Defending Freedom group.

In the speech Mr Abbott declared that "we need less ideology and more common sense" but reaffirmed his strong opposition to same-sex marriage. He urged policy makers to pass on the institution of marriage "undamaged" to future generations and said most children would prefer to be raised by a mother and father.

Mr Abbott drew on his own family's experiences by noting that two of his sisters are divorced and one is now in a committed lesbian relationship.

"We shouldn't try to change something without understanding it, without grasping why it is that one man and one woman open to children until just a very few years ago has always been considered the essence of marriage and the heart of family," Mr Abbott said.

"We can't shirk our responsibilities to the future, but let's also respect and appreciate values and institutions that have stood the test of time and pass them on, undamaged, when that's best. That's a goal we should all be able to share."

Mr Abbott said people should be respectful in the same-sex marriage debate, but that the consequences for the traditional family structure from changing the definition of marriage should not be ignored.

"Policymakers shouldn't be judgmental about people's personal choices but we can't be indifferent to the erosion of family given its consequences for the wider community," Mr Abbott said.

"It was my distinguished predecessor John Howard who pointed out that the traditional family was the best social welfare system that mankind has ever devised."

Ms Forster, a Sydney City councillor, took aim at her brother's stance on Twitter, saying: "Marriage is good for our society. That's why it's better for all of us if more can be married ... Allowing same sex couples to marry doesn't damage the institution in any way. It honours it."

In 2012, Ms Forster publicly revealed she was in a committed lesbian relationship.

In a reference to his own family, Mr Abbott said: "These days, at least in Western countries, family structures are typically more complex than they used to be.

"Two of my sisters are divorced. One has a new partner. Another has a same-sex partner. To me, my sisters' partners are first-class members of our extended family.

"The way they live shows their commitment to each other, even though there's been no ceremony.

Mr Abbott, deposed by Malcolm Turnbull in September, announced this week that he would remain in politics for another term as the member for Warringah.

Same-sex marriage has been legal in the US since a landmark Supreme Court ruling in June last year, but remains outlawed in Australia.

Debate over same-sex marriage flared again in the Coalition this week after several government MPs said they would not vote for change even if it is supported by the Australian people at a plebiscite.

Nationals senator Bridget McKenzie on Thursday said she would continue to vote with her conscience against same-sex marriage regardless of the plebiscite result.

By contrast, Nationals colleague Michael McCormack said he would respect the will of the majority of Australians.

On Friday morning Mr Turnbull said Parliament would "absolutely" legalise same-sex marriage if the Australian people back it at a plebiscite - despite some government MPs this week saying they would never vote for the change.

"The Coalition party room, this is when Mr Abbott was prime minister, made a decision that the matter would be put to the people, that the people would decide," he said.

"Tony Abbott was quite explicit about that. He said the people will decide, not the politicians. Well fair enough. So that's our position. It's perfectly democratic."