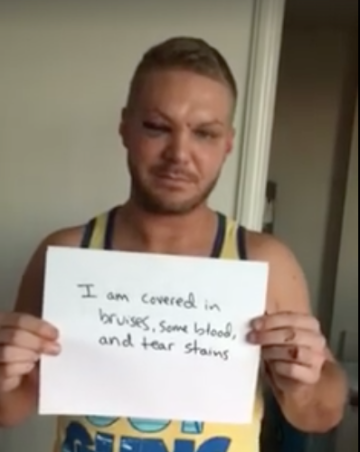 San Francisco resident Jeffery Lafayette says he was gay-bashed in the city on Saturday, February 6, as many were gearing up for the Super Bowl. It's so far unclear where the incident took place — SFist has reached out to him to find out if he's willing to talk — or how many perpetrators were involved.

But a visibly bruised Lafayette with one eye swollen shut posted the public video above in part to garner a positive emotional response on Facebook, and to remind everyone that these things do still happen here, in liberal San Francisco. He says the incident took place all because he was wearing white pants, and, he jokes, "And I didn't think it had anything to do with Labor Day."

He adds, "The strength of your love is more powerful than any fist!... The LGBT youth needs to see this so they are aware of the hatred that is still out there. But tell them that no matter how much hatred or cruelty you are faced with, the love from those you surround yourself with is STRONGER than anything!"

Update: Lafayette says there was a group of "20 straight guys" who were the perpetrators, and a witness, his friend Ryan Eick confirms that Lafayette fought back. Also, he says, "No police were called. Guaranteed the people who started the whole thing were from out of town and here for the super bowl and don't realize it's a hate crime to gay bash." The exact location of the crime remains unclear.

Meanwhile, having reached a modest crowdfunding goal of $900 to deal with his injuries, Lafayette has extended the goal to $10,000 and has pledged to use the attention this has received, and any money beyond his original goal, to buy bags of groceries to pass out to the homeless. Donate here.