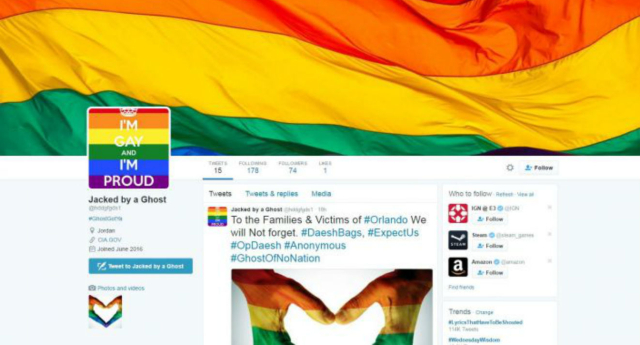 A hacker who took over the social media accounts of various pro-ISIS groups has described how he has received threats of beheading.

WachulaGhost began targeting the accounts since a shooting took place at the Orlando Pulse nightclub in Florida.

He says he began targeting pro-ISIS accounts because someone needed to “stand up” to the extremist group.

He told CNN: “I get beheading images… death threats. ‘We’re going to kill you’ and that’s good because if they are focusing on me they are not doing anything else.

“Sometimes you have to stand up and make a change for the good.”

Going on, he says that ISIS supporters generally don’t have very strong computer literacy, and that it takes around 60 seconds for him to hack each account.

“Daesh [ISIS] have been spreading and praising the attack, so I thought I would defend those that were lost. The taking of innocent lives will not be tolerated,” he said of the Orlando shooting.

“Our actions are directed at Jihadist extremists. Many of our own [group of hackers] are Muslim and we respect all religions that do not take innocent lives.”

The hacker – who is affiliated with Anonymous – first began hijacking the accounts months leading up to the shooting, but stepped up his efforts following the mass shooting at Pulse nightclub on Sunday.

In that time, he took control of hundreds of Twitter accounts belonging to ISIS supporters.

Messages posted to the compromised accounts include “I’m gay and proud” and “Out and proud.”

However, the hacker says his efforts are not aimed at the Muslim population as a whole – only the few “Jihadist extremists” that operate on the site.

“I did it for the lives lost in Orlando. Daesh [ISIS] have been spreading and praising the attack, so I thought I would defend those that were lost,” he told NewsWeek.

“The taking of innocent lives will not be tolerated.”

In the wake of the mass shooting, American Muslim leaders warned ISIS that they do not speak for their community.

Nihad Awad, speaking for the Council on American-Islamic Relations told reporters that the shooting was “a hate crime, plain and simple.”

Since the attack, the organisation has urged the Muslim community to donate blood after a shortage due to the high number of victims.

49 people were killed and 53 injured in the hate crime, which saw a gunman open fire inside The Pulse gay bar.

ISIS since claimed responsibility for the attack, which was perpetrated by US citizen Omar Mateen.