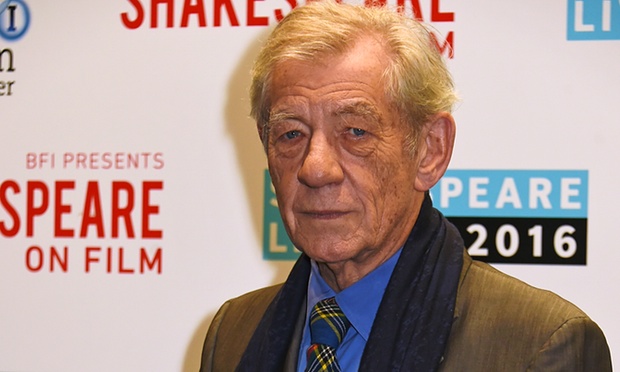 Ian McKellen, the veteran British actor who found global fame through the Lord of the Rings movies, has cautioned that homophobia is as much of an issue among Academy voters as racism. Commenting on Monday on the current row over the lack of diversity among both Oscar voters and this year’s nominees, McKellen suggested prejudice was the reason no publicly out man had ever received an Academy award for best actor.

He expressed sympathy with black actors angry that they were “being ill-treated and underestimated,” but said the issue was a wider one.

“No openly gay man has ever won the Oscar; I wonder if that is prejudice or chance,” he said, with the implication that he felt it tended towards the former.

Tom Hanks, Philip Seymour Hoffman and Sean Penn have all won best actorOscars for playing gay men. “How clever, how clever,” said McKellen. “What about giving me one for playing a straight man?

“My speech has been in two jackets … ‘I’m proud to be the first openly gay man to win the Oscar.’ I’ve had to put it back in my pocket twice.”

McKellen was first nominated for the best actor award in 1998, missing out toRoberto Benigni for Life is Beautiful; and for best supporting actor as Gandalf in the first Lord of the Rings film (Jim Broadbent won for Iris). He had been felt by many to be a potential contender this year for his acclaimed role as an ageing Sherlock Holmes in Bill Condon’s Mr Holmes; but he missed nominations from most major awards bodies.

As it stood, said McKellen, the Oscars voting system was not fit for purpose. “If you are trying to have a career, as a black or Hispanic actor in a state – California – where white people are now the minority, and you are being judged by an Academy where the vast majority are white, male, middle-aged and old … well, perhaps that is the wrong yardstick.”

This year is the second in succession that the Oscars have produced all-white acting shortlist. The growing row prompted the Academy to announce on Friday a “sweeping series of substantive change” with the number of “women and diverse members” of the Academy doubled by 2020.

That is too late for some, however, with Will Smith joining his wife Jada Pinkett Smith in vowing not to attend this year’s ceremony. Host Chris Rock over the weekend restated his commitment to the event, but producers have suggested he will be tackling the issue in his opening monologue. McKellen was speaking at the London launch of a BFI Shakespeare season which will include his 1995 film of Richard III, in which he starred and adapted the text.

He also had a big say in who starred alongside him, turning down a 12-year-old Eddie Redmayne for a part as one of the princes in the tower.

“Eddie Redmayne is a bloody good actor even though I had the privilege of denying him his first film part,” said McKellen.

“I didn’t think he was good enough … I can’t remember why. We turned down this little Eton boy.” McKellen did, however, give another Eton-educated actor his first film role:

Dominic West, who played the Earl of Richmond. McKellen said Eton alumni had an in-built advantage in that their school had a theatre which would “satisfy the needs of somewhere like Derby”.

It was concerning, he said, if working-class people could not afford to study acting. “It would be dreadful if only the privately educated could get to Rada.”

The BFI will screen Richard III and re-release it on DVD. On the suggestion of McKellen, it will also organise a bus tour of the film’s London locations including Hackney gas towers, Battersea power station and what is now Tate Modern.

McKellen himself will be the tour guide, although probably only on one occasion.

BFI head curator Robin Baker said it was likely to be the most oversubscribed event the BFI had ever organised.

The Shakespeare season in April and May, marking the 400th anniversary of his death, will include many screenings as well as an international tour of 18 British Shakespeare films visiting 110 countries including Cuba, Iraq and Russia.