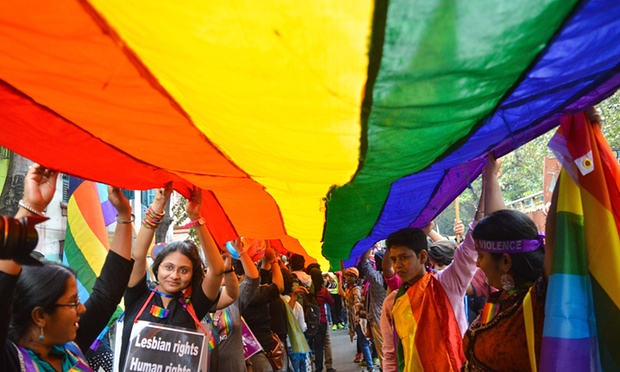 Gay rights organisations are holding vigils and demonstrations in the Indian capital ahead of a supreme court ruling that could decriminalise homosexuality.

The three most senior judges of the Indian supreme court in Delhi will rule on Tuesday on a previous judgment from 2013, which reinstated colonial-era legislation that in effect outlawed gay sex. That decision stunned many in India, overturning decades of slow progress and prompting protests.

Sexual relations have become a battleground in India, often revealing cultural splits between generations, between urban and rural dwellers, and between those who invoke a “traditional past” supposedly uncontaminated by western influences and those who stress a local history of pluralism and tolerance.

Anjali Gopalan, executive director of an HIV/Aids advocacy organisation called the Naz Foundation who filed the petition to strike out the key laws, said decriminalisation was “the least that can be done”.

She said: “Section 377 is a remnant of our colonial past. Now even the UK has decriminalised it, so why should we hold on to it?”

A high court had previously legalised homosexuality, in 2009. Gopalan said that decision dramatically changed public attitudes. “After 2009, gay rights issues could no longer be swept under the carpet. It opened the door to talking about the issue in the media,” she said.

The decision to recriminalise homosexuality in 2013 came after a legal campaign by a coalition of conservatives including Muslim and Christian religious associations, a rightwing politician and a retired government official turned astrologist.

The supreme court is known for its broadly progressive judgments that often order politicians or officials to respect the rights of the poor, disadvantaged or marginalised communities.

Gay rights activists have said the community faces significant discrimination and police harassment, even if prosecutions for same-sex activity have been rare. Criminalising homosexuality makes them vulnerable to blackmail, they say.

Shashi Bhooshan, a gay rights activist, said he was hopeful for a favourable verdict on Tuesday. “All the big media organisations are talking about civil liberties and human rights, so I wouldn’t be surprised if the court ruled in our favour,” he said.

“I feel excited and nervous for tomorrow. If we get a good verdict, it will be a big step forward and give me security as a citizen of this country. How can I be living in the world’s biggest democracy in 2016 and still be denied a fundamental human right?

“Right now, I am considered a criminal. There’s a fear around it, a social stigma. But it becomes easier to change people’s minds if the law is on your side. It is easier to explain to them that you’re not doing anything wrong, that you’re normal.”

Bhooshan volunteers with the Naz Foundation to spread awareness about lesbian, gay, bisexual and transgender rights. “Almost every day I hear about LGBT people being harassed by the police,” he said. “We get arrested just for distributing leaflets – police say they are arresting us for encouraging illegal and immoral activities.”

Defenders of the 2013 supreme court decision said the objections of the judges to the repeal of section 377, which is the key clause on “unnatural offences”, were “constitutional and legal, not moral”.

However, critics said that the wording of the judgment – which referred to the “so-called rights of LGBT persons”, described same-sex relations as “against the order of nature” and said that “lesbians, gays, bisexuals or transgenders constitute only a miniscule fraction of the country’s population” – revealed deep prejudices.

Vikram Seth, one of India’s best-known novelists, described the court’s decision as showing an “intellectual shabbiness and ethical hollowness” that went against the true culture of an enormously diverse country.

“We are each of us in some way – by caste, gender, sexuality, language or religion – a minority, and the great achievement of the Indian polity over three generations is that somehow or other we have kept together as a nation,” Seth, 63, told the Guardian at the time.

Krishtulshyan, an activist from a group called the Indian LGBT Community based in Bihar, in eastern India, said she knew people who had travelled to other countries to get married and others who had killed themselves after suffering abuse for being gay.

“It would be like heaven for us if the court rules in our favour,” she said. “No one is open about it. They’re afraid of what society will think. There’s many cases of people getting removed from college for being gay, or not getting jobs because of it. If it’s legalised, all that will stop.”

For Krishtulshyan, too, Tuesday’s decision could be life-changing. “If I get the right to live freely, I will tell my family that I want to marry my girlfriend,” she said. “If it’s legal then nobody can stop us or put us in jail for being together.”