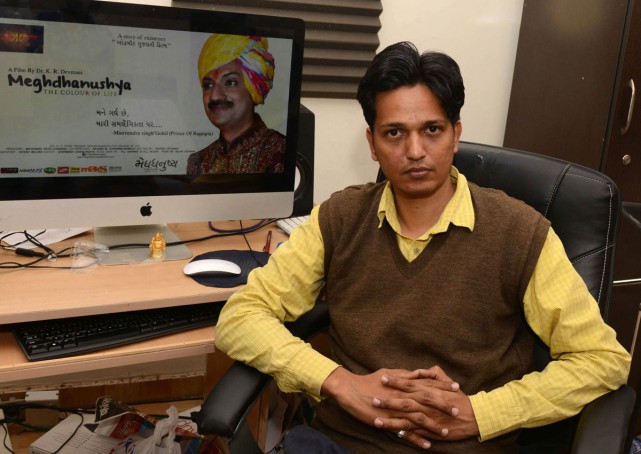 Ahmedabad, India - When Kiran Kumar Devmani decided to make a film about homosexuality, he braced for a fight with India's notoriously conservative censors, but he never imagined he would have to battle the tax office.

Three years after finishing the project, Devmani is still embroiled in a struggle with tax bureacrats who claim his film could provoke a law and order problem in India where gay sex is a criminal offence.

"What is controversial about homosexuality?" Devmani, an ayurvedic doctor-turned filmmaker asked in his small office in a shopping mall in the western city of Ahmedabad.

"My film does not have a single scene where gay men are shown even holding hands. The film is basically about the struggles of homosexual men in society in different stages of life," the 30-year-old told AFP.

Like all filmmakers, Devmani wants a tax exemption for his independent movie before its release, an application that is routinely granted to avoid artists losing money on their projects.

But the government in Gujarat, Prime Minister Narendra Modi's home state, has knocked back his request on the grounds that "Meghdhanushya - The Colour of Life" could send a "negative signal" that the administration endorses "such ideology".

India's film censor board has already approved the film, giving it an Adults Only rating, and the Gujarat High Court has ruled in Devmani's favour over the exemption.

But the government has dug in its heels, appealing the ruling to the Supreme Court, a lengthy process in India's notoriously clogged legal system.

Devmani's fight comes as India's gay community this week celebrated the Supreme Court's decision to review the national law banning gay sex that dates back to the 19th century.

The review by a special bench of judges sparks hope among campaigners that the colonial-era legislation which enables homosexuals to be jailed will eventually be overturned.

The announcement is small comfort for Devmani who says he is being victimised in a socially conservative country where homophobic tendencies abound and gays regularly suffer harassment and violence.

"The arguments by the state government for not granting tax relief reflects their attitude towards gays in our society," he said.

The tax office declined to comment to AFP, saying the matter is sub judice.

But it has argued in court that the film "promotes" an illegal activity "which is also a social evil" and should therefore be denied exemption from entertainment tax.

It also says the film could disturb law and order by fostering friction between those who support and those who oppose homosexuality.

Devmani has won the backing of gay groups and Gujarat's openly gay prince, Rajpipla Manvendra Singh Gohil, who says more such films should be encouraged to educate society about gays and lesbians.

Gohil, the descendant of a centuries-old royal family in Rajpipla, a former princely state in Gujarat, narrates sections of Devmani's film.

The 50-year-old was shunned not just by his local community but by his own family when he first came out and is now committed to fighting the spread of HIV/AIDS through his charity.

"There is no obscenity or vulgarity in Devmani's film," said Gohil.

"I believe the entertainment tax officers need to be educated on the issue. They seem to ignorant about homosexuals," he told AFP.

Few films have tackled attitudes towards homosexuality in India where Bollywood often ridicules gay characters and portrays them as being extremely camp. But "Aligarh", a Bollywood flick based on a true story that deals with homophobia, was warmly received when it was released last year.

Devmani said he is being worn down by the battle and will probably go ahead and release the Gujarati-language film without exemption from the levy -- a stiff 25 per cent tax on box-office receipts.

"I will wait for the next six months and then release the film even if the exemption is not granted," he said.

The filmmaker plans to forge ahead with movie making despite the controversy, with two Hindi-language films in the pipeline.