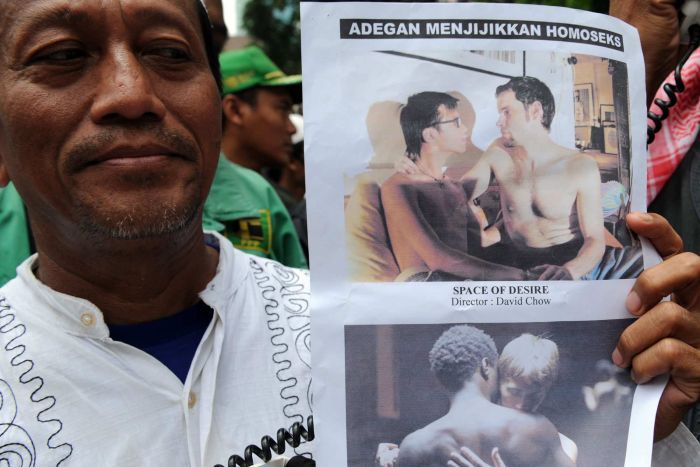 Indonesia's gay community has come under attack, with the country's Defence Minister labelling the community a "threat" and likening fighting it to "a kind of modern warfare".

When a minister criticised counselling services for gay students at a university last month, it triggered a heated media debate and was the start of what activists say has been a sustained assault on gay rights.

The Government has shut down a slew of websites, ordered TV programs depicting gay lives off the air and demanded all instant messaging apps remove same-sex emoticons — like men holding hands and the symbolic rainbow flag — or face a ban.

Hardline Defence Minister Ryamizard Ryacudu this week labelled the influence of the gay community "a threat" and said fighting it was akin to "a kind of modern warfare".

"It's dangerous as we can't see who our foes are, but out of the blue everyone is brainwashed," he was cited as saying by news website Tempo.

Indonesia's top Islamic clerical body has revived a push for gay sex to be criminalised, saying it is not only "deviant" but against the country's founding principles, and MPs are reportedly considering drafting an anti-homosexuality bill.

Homosexuality is generally taboo in the world's most populous Muslim-majority nation and gay people have in the past suffered verbal and physical attacks.

However it is legal in most of the country, with a notable exception being ultraconservative Aceh province, and homosexuals have mostly been able to quietly get on with their lives.

It is unclear why the recent furore has gained such momentum, but it follows a push by religious leaders and conservative politicians to bolster public morality in Indonesia, with crackdowns on prostitution and the availability of drugs and alcohol.

Activists also say that gains made abroad for LGBT rights, particularly the legalisation of same-sex marriage across the entire United States in June, have heightened scrutiny of Indonesia's gay community and fanned homophobia.

Much of the concern from senior political figures has revolved around a sense that the LGBT community is seeking to push for changes viewed as contrary to Indonesian culture, like same-sex marriage.

Despite his silence so far, many still have faith in President Joko Widodo, whose past promises to address human rights abuses and champion minority groups have earned him the strong backing of almost all LGBT people in Indonesia, said Teguh Iman from Suara Kita, a Jakarta-based group.