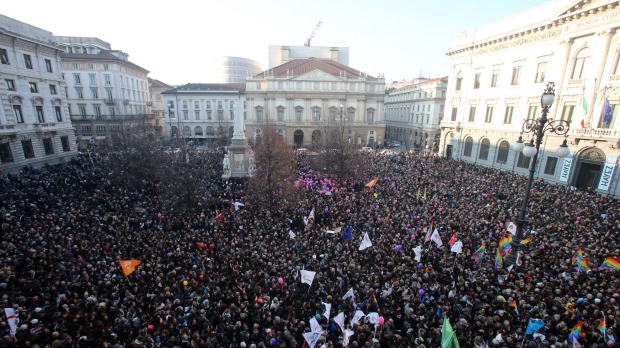 Rome: Thousands of Italians have taken to the streets in support of gay civil unions as the battle over legal recognition for homosexual couples heats up ahead of a bill to be debated in parliament.

"Wake up Italy, it's time to be civilised," was the slogan chosen for rallies in almost 100 towns and cities on Saturday in the only major country in the West not to give same-sex couples any legal recognition or protection on issues from pensions to parenthood.

"In Italy people think that there are those who are allowed to have rights and those who aren't," said Liliana Rizzo, a member of a gay parents' association, at a rally outside the Pantheon in central Rome.

"We don't want to take anything away from the traditional families ... but our families also exist, our children exist and our children need to have both of their parents recognised."

The European Court of Human Rights has condemned Italy for failing to introduce a law on civil unions, but with the influence of the Catholic Church seen as a strong brake, legislation has been held up by politicians of all stripes.

On Thursday the floor of the Senate will begin debate on a bill that would legalise civil partnership for homosexuals as well as unmarried heterosexual couples. Many opponents see the bill as a Trojan horse that would lead to the legalisation of gay marriage. 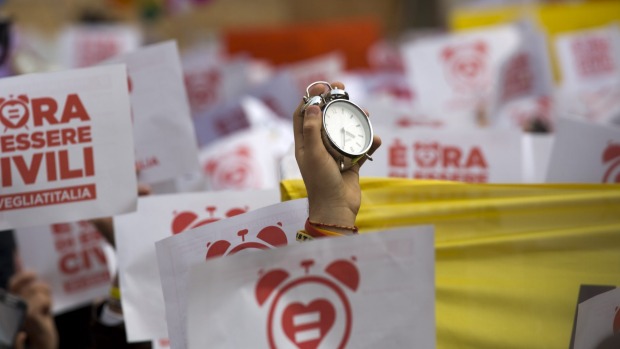 With the country divided on the issue, on January 30 opponents of the bill will gather in Rome for a demonstration dubbed "Family Day", which is expected to draw tens or even hundreds of thousands of people.

"Finally there is a cultural debate and the whole country is discussing an issue that was previously taboo," said senator Monica Cirinna, the author of the bill, which has already attracted more than 6000 proposed amendments.

Pope Francis stepped into the debate on Friday, saying "there can be no confusion between the family God wants and any other type of union".