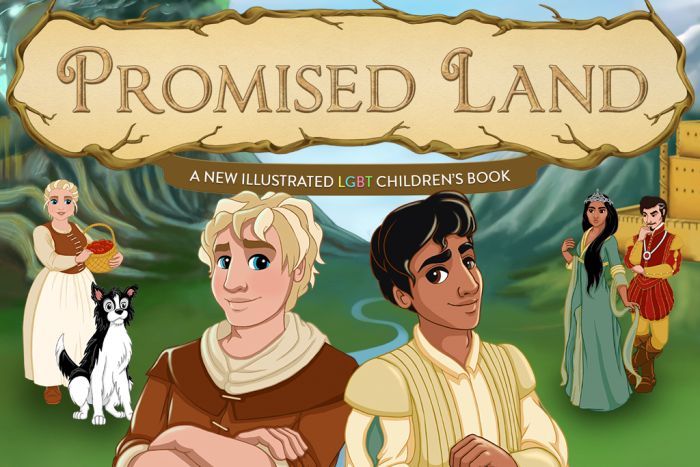 An LGBTI-themed fairytale book, about a prince named Leo and a farm boy named Jack who meet and fall in love, will be officially published after surpassing its crowdfunding goal.

Described as "a fantastical story about friendship, adventure, responsibility and love", Promised Land was co-authored by Adam Reynolds and Chaz Harris, who are both based in Wellington, New Zealand.

Harris, also a filmmaker, told the ABC the pair were "thrilled" the project had met its target.

"It's so great to know there is enough interest in a book like this and how much it already appears to mean to people who feel it is long overdue," he said.

Harris said his motivation came from a segment on a 2008 episode of The Ellen DeGeneres Show about Larry King, a 15-year-old US student who was murdered by his classmate for asking him to be his valentine.

During the show, DeGeneres said "somewhere along the line, the killer, Brandon got the message that it's so threatening and so awful, and so horrific that Larry would want to be his valentine, that killing Larry seemed to be the right thing to do".

"And when the message out there is so horrible, that to be gay you can get killed for it — we need to change the message," she said.

Harris said he remembered "feeling so helpless" at the time.

"When I heard Adam's initial concept, it made me realise we could at the very least be a small part of trying to change the message to a more accepting one," he said.

But both Harris and Reynolds agreed the story should stand on its own.

"The conflict does not arise from a coming out story or someone struggling with their sexuality or a disapproving parent. In this utopian kingdom, sexuality isn't questioned," he said.

"These characters just happen to be two young men who fall in love during the course of the story, just like any other fairytale couple who go on an adventure together."

'It just means I'm like Prince Leo and he was awesome'

Harris said it was important lesbian, gay, bisexual, transgender and intersex stories were represented in print and on screen — just as heterosexual stories so commonly are.

Harris said it was important children had gay characters to relate to.

"There are so few stories available for parents to easily discuss with their kids that the world is full of all kinds of relationships," he said.

"When people have questioned the 'appropriateness' of five to 10-year-olds learning about being gay, they are going to be asking that question soon enough because gay people don't pop out of a lamp at the most convenient age for parents — we exist too.

"I went through a tough time at school with bullying and I definitely attribute my own discomfort with being gay as having few role models to show me that a happy future was possible as a young gay person.

"If they already have an awareness that there is someone in a story to connect back to their earlier childhood years, they will think: 'It's okay, because it just means I'm like Prince Leo and he was awesome'."

The book is set to be released on October 11, recognised as Coming Out Day.