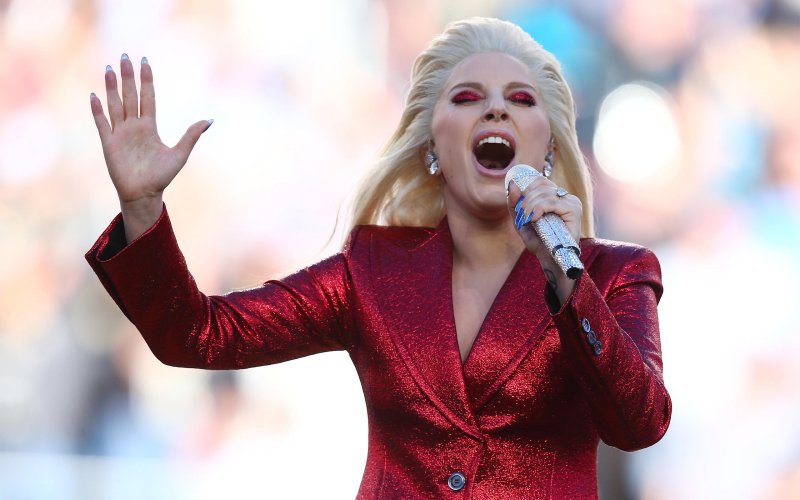 Dressed mutedly—this is Lady Gaga, every thing is relative—in a shimmering red pantsuit, her eyelids beglittered to match, and her hair teased up to be closer to God (or closer to the planet she’s beamed down from, take your pick), our Mother Monster looked like a fancy lady who stuck her finger in an electrical socket. And then she electrified us with a campy, full-voiced, theatrical-as-hell rendition of the “National Anthem” at the Super Bowl.

And she did it at the biggest, most American, and, arguably, most conservative showcase an entertainer can be given.

Ever since Whitney Houston set her vocal chords bursting in air in 1991, a beacon moment for the melding of patriotism and melisma, the singing of the “National Anthem” prior to the Super Bowl has been not so much a showcase for the diva of the moment’s belting fireworks (though it very much is that) as it has been a reflection of our cultural times.

With all eyes on her, Gaga sang a “National Anthem” that was so earnest that it ascended to camp. This wasn’t Faith Hill schmaltzing about the rockets’ red glare. This is a Broadway babe singing to her fans, her misfits, her gays like the theatrical drag queen she is.

To you, maybe she seemed traditional. To us, she was serving.

She sounded phenomenal. It’s the plight of the Little Monsters: dress yourself up too much or over-embrace your weirdness, and you’re suddenly a distraction. Lady Gaga has always been one of our most talented pop vocalists, but as just one component of an act that included a costume, a mentality, and a put-on-a-show production, those vocal chops somehow got lost.

It was only recently, when she stripped away the trappings, that many have taken notice.

Still, for those who knew all along, there’s a power in her being given this showcase. You might assume we’re reading too much into this, and that may be the case.

But at a time when gay rights, LGBT struggles and queer violence, depression, suicide, and acceptance dominate political and cultural conversation, it speaks to the America that, if not the one we have now, is the one that we may be heading towards that it was Lady Gaga, our queer hero, who was the one to sing for us.

That it was Lady Gaga who sang for not just us, but us, an entire country as we seized our patriotism and embraced our Americanness: by pledging to our flag and then gathering en masse around a television set to eat an obscene amount of food.

Maybe it was just a talented singer performing a solid rendition of the “National Anthem.” But maybe, pray to Saint Whitney, it was also a sign of the times.