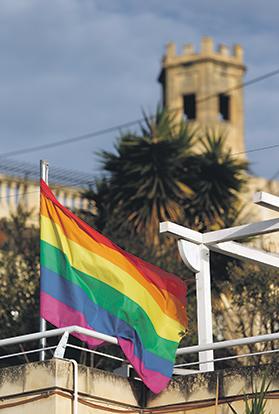 Recent changes in the law have ensured more equal rights for LGBT people. However, the shift towards greater cultural acceptance has also had an unexpected side effect – positioning Malta as a destination for gay travel.

The Malta Tourism Authority (MTA) has recently embarked on a campaign in the US and Canada promoting Malta as a “winter escape for the LGBT traveller”.

One such feature in American LGBT publication Out Magazine highlights Malta’s culture, history and beautiful beaches – but also its status as the top LGBT-friendly European country according to Ilga-Europe.

“LGBT travellers have long been associated with higher-spending brackets of worldwide tourism flows,” an MTA spokesman said. “This niche has the characteristics of being well-educated, frequent travellers, higher net income earners with a propensity to travel all year round.”

The MTA first started targeting gay travellers, focusing particularly on the winter months, last year in the German-speaking market, before expanding to the US and Canada this year. Further initiatives are planned for Belgium, the Netherlands, Spain, the UK and Scandinavia.

Malta is not the first country to tap into this lucrative niche. The Gay European Tourism Association estimates the value of the gay tourism market in Europe at €50 billion a year, while a study in Philadelphia found that for every dollar invested in marketing, gay tourism returned $153 in spending on shops, hotels, restaurants and attractions.

David Bajada, manager of gay club AXM in Paceville, said Malta could easily compete with established LGBT destinations like the Canary Islands and Barcelona. In the past few years, the number of gay tourists and expats visiting his club has increased substantially, with as many as 35 per cent of his patrons now foreign.

AXM is also hosting this year’s edition of Mr Gay World, with Malta beating Mexico and Singapore for the rights to hold the event. The competition, on which the MTA is collaborating, will bring together 22 contestants and at least 40 journalists.

“We have a lot to offer, but we’ve never really targeted this market,” Mr Bajada said. “Big events like this can really help to put Malta on the map.”

Aldo Gatt, the manager of gay-friendly guesthouses Valletta G-House and Indulgence Divine, said that while it was good to see the MTA acknowledging the gay market segment, it had to be careful not to fall into the trap of assuming gay people’s lives were simply defined by their sexuality.

“Gay men and women are as diverse in their tastes and lifestyle as anyone else,” Mr Gatt said. “It’s a minefield for those who are not ‘streetwise’ in the diversity that exists; it would be easy to think of your average gay club patron and forget same-sex parents.”

While Malta’s new progressive reputation was a definite selling point, Mr Gatt said that often, a general sense of feeling comfortable and welcomed was more important to gay travellers than a country’s rights record.

He also highlighted the wedding sector, another niche actively targeted by the MTA, as one to build on in the context of LGBT travellers.

“We’ve had several gay couples on their honeymoon,” he said. “We haven’t as yet had any gay couples who were on the island to get married – but I imagine this will happen soon.”