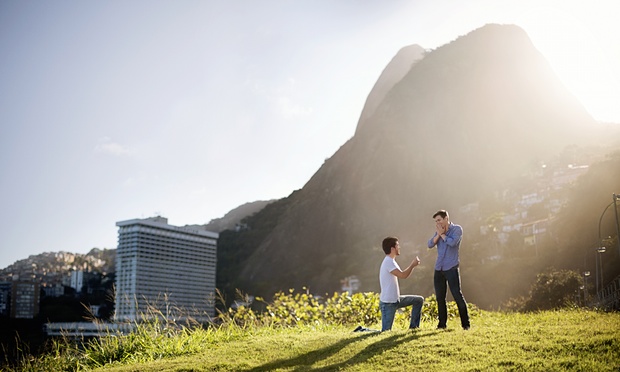 It was personal experience that drove Darren Burn to launch LGBT travel specialist OutOfOffice.com. “I went to Egypt with my ex-boyfriend a couple of years ago and I spent ages researching where was safe and open to go,” he says. “But when we got there the hotel was really unwelcoming – we had to find somewhere else. I realised I should be able to go anywhere in the world and have that reassurance.”

Launched at the end of last year, OutOfOffice is an online travel agent that hopes to set a new example for the way the industry caters for LGBT travellers. It seems to have struck a chord, turning over £1m in its first three months alone.

Burn, who quit his job as an ITV journalist in 2014 to start the company, says gay people are still frequently let down by travel agents. “Companies say they are gay friendly, but their brochures will have pages and pages of pictures and not one same-sex couple,” he says. “This can be alienating.”

LGBT travellers can struggle to be sure the holiday they are booking won’t lead to awkward, or even hostile encounters. The court battle between a gay couple and the Cornish B&B owners who turned them away is a case in point. Burn tells of a lesbian couple asking a high street travel agent for reassurance before booking and being told: “We just won’t tell them.”

“Anyone can slap on a gay-friendly sign,” he says. “The reality is different.”

OutOfOffice.com hopes to open up destinations beyond the traditional party spots in Greece and Spain, and asks every destination, partner and hotel specifically what it does to welcome LGBT people. Many of its staff are gay, and customers – who also include heterosexual travellers – have an option to enter their sexuality when making an initial inquiry. “A lot of gay people want to be able to talk to somebody who just gets it,” says Burn.

Other travel companies are also targeting the LGBT market, which, according to market researcher Forrester, is worth £6bn in the UK and $85bn in the US. Gay marriage travel has contributed significantly to this trend. This week, holiday company Kuoni announced it has recruited a 10-person team of LGBT experts to help advise on cultural attitudes in various destinations. It revealed that same-sex honeymoon bookings have increased by 279% over the past five years. Following this, pressure group Stonewall urged tour operators to take “more responsibility” for helping the LGBT community get the best out of their holidays and travel safely.

“It’s easy to assume, especially when based in a major urban centre like London, that everyone is aware of LGBT travellers,” says John Tanzella, president of the International Gay and Lesbian Travel Association. “That is still not the case in far too many parts of the world.”

Although cultural acceptance of LGBT people has been improving in many destinations, this is by no means universal; more than 75 countries still have some form of anti-homosexuality laws. Still, even in destinations with discriminatory legislation, OutOfOffice are able to offer practical advice and support to travellers planning a trip there and suggest hotels and resorts where they can be confident they are welcome. In the Maldives, for example, where same-sex relationships are illegal, OutOfOffice has partners that will still extend their honeymoon packages to same sex couples. As Burn puts it: “Gay people are going to travel anyway: just at the back of their mind is the question of whether it will be OK.”