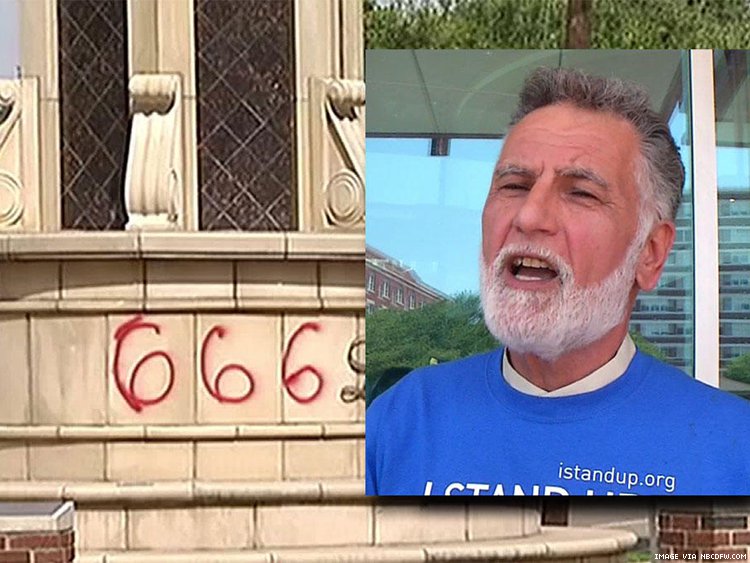 A Dallas man will spend no time in jail after pleading "no contest" to vandalizing a church driveway and a local gay landmark with “666” in June 2014, reports the The Dallas Morning News.

Richard Sheridan admitted to "intentionally and knowingly" spray-painting the so-called Mark of the Beast on the driveway of Dallas's Cathedral of Hope and on the Legacy of Love Monument at Cedar Springs and Oak Lawn, "because of their significance to the LGBT community," according to court documents obtained by the Morning News.

Sheridan will be sentenced April 15. The charges against him carry a possible jail sentence up to 10 years and a fine not to exceed $10,000. However, Sheridan accepted a plea agreement and will "instead receive deferred community supervision for two years in each case, to be served concurrently, and will have to pay $2,000 in fines, only if he violates the terms of his probation," reports to the Morning News.

Sheridan initially denied being the person seen on surveillance footage vandalizing the landmarks, claiming that he had nothing to do with painting "666" on several local buildings, including the headquarters of the Morning News. He did, however, claim that he knew who was guilty and that the person was someone like him, who "dares to call out the immorality of the Gay lifestyle, to reference the Bible in saying that the Gay community is violating Gods [sic] laws," he wrote in a letter addressed to Dallas police reportedly posted on his Facebook page in August 2014.

The senior pastor of Cathedral of Hope, the church that was vandalized, said church leaders and members of the community met to discuss Sheridan and ultimately accepted the plea agreement because they felt it was "the right thing to do," according to the Morning News. Some church leaders had expressed hope that Sheridan would face hate-crime charges but eventually agreed to the deferred sentence because of Sheridan's "mental state."

“As a church, we believe in second chances and want to offer that to him,” Rev. Neil G. Cazares-Thomas told the paper. “He’s now in a system where he will be supervised, and if he does do something, that second chance is removed from him.”