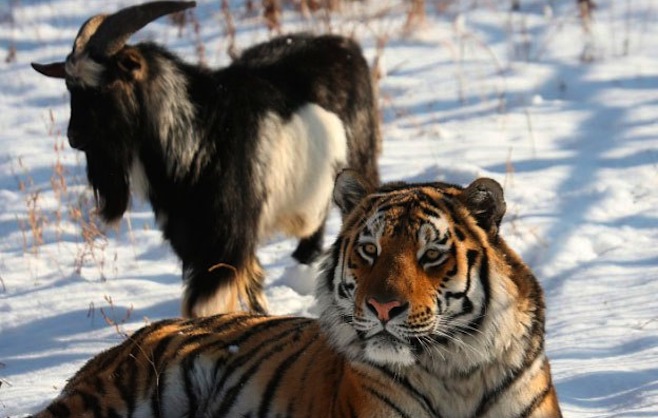 A lawyer in Novosibirsk has called for a ban on stories about a goat and a tiger in a national park in Russia's Far East, arguing that the widespread media coverage of the pair is 'covert gay propaganda' and poses a threat to Russian children.

The animals gained worldwide fame when Amur the tiger failed to pounce on a goat named Timur after it was released into his enclosure at the Primorye Safari Park as dinner.

Instead of eating his prey, Amur developed an unlikely friendship with the goat and the two were filmed walking around the park together, charming media audiences worldwide. YouTube videos of the pair received millions of hits.

But lawyer Alexei Krestianov has appealed to the General Prosecutor's Office to ban future coverage because it poses a threat to the rights of children, a copy of the letter published on his personal Facebook page on Wednesday, said.

The letter argued that the “positive” exposure given to the “non-traditional co-habitation” of two male animals was “an intrusion into the private lives of underage citizens and covert gay propaganda, as well as an active imposition of homosexuality.”

Krestianov added the stories could have a negative influence on the formation of children's personalities by “arousing interest in non-traditional sexual relationships” and causing confusion over their sexual identities.

Earlier this week the zoo reported Amur and Timur had been separated for the goat to undergo a veterinary inspection. Amur's behavior toward Timur could also become more threatening as the tiger enters mating season, the zoo said in an online statement.