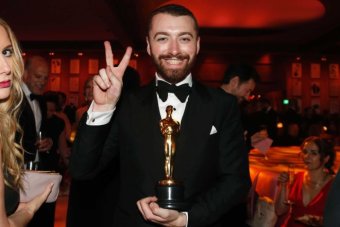 In his acceptance speech, Smith dedicated his award to the lesbian, gay, bi-sexual and transgender (LGBT) community, saying he had read an article by actor Sir Ian McKellen that said "no openly gay man had ever won an Oscar".

"If this is the case — even if it isn't the case — I want to dedicate this to the LGBT community all around the world," he said.

"I stand here tonight as a proud gay man and I hope we can all stand together as equals one day."

As soon as Smith stepped offstage, he was quickly informed that he was in fact not the first publically homosexual man to be recognised.

Instead, he joins a string of winners, including global music icon Elton John, who won Best Original Song in 1995 for Disney's Lion King classic, Can You Feel The Love Tonight.

Following the gaffe, Twitter was abuzz with both criticism and support for Smith.

McKellen, who is best known for his role as Gandalf in The Lord of the Kings series, was quick to clarify what he had actually said in the article.

"I'd said no openly gay actor has received an Oscar," he tweeted.

"That doesn't detract from Sam Smith's achievement. Congratulations to him and all others."

Meanwhile, screenwriter Dustin Lance Black, who won Best Original Screenplay in 2009 for his work on Milk, linked Smith to a video of his acceptance speech.

"Knowing our LGBTQ history is important. We stand on the shoulders of countless brave men and women who paved the way for us," he wrote.

Smith has since apologised on Twitter, both directly to Black and the wider community.

"Second openly gay man to win an Oscar or third or fourth or 100th. It wasn't my point," he tweeted.

"My point was to shine some light on the LGBT community, who I love so dearly."