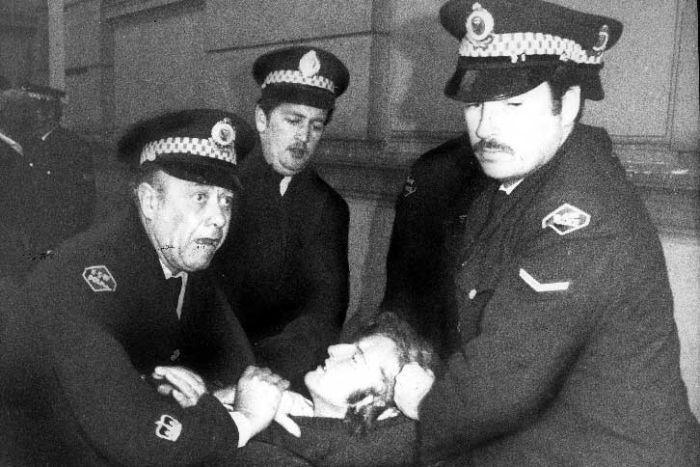 The New South Wales Government has offered an apology to participants in Sydney's first ever Mardi Gras, who were arrested and bashed by police when attempting to parade in 1978.

After they were arrested, many of the protesters had their names, addresses and professions published in the press.

In all, 53 people were arrested and many were savagely beaten by police.

"I hope it's not too late that you can accept an apology but also we want to recognise that for all of that pain that you went through, you brought about fundamental change in this society and fundamental change for the many gay and lesbian people like myself, who can be open and relaxed about ourselves.

"You were the game changers."

He continued: "For the mistreatment you suffered that evening, as a member of this Parliament, who oversaw the events of that night, I apologise, and I say sorry.

"As a member of a parliament that dragged its feet on the decriminalisation of homosexual acts I apologise."

The apology received a long round of applause from the public gallery, which was filled with some of the activists who took part in the march.

"Because we should talk about it, particularly for young people," he told parliament.

"For young people, there is almost an acceptance of the rights that exist for people from the LGBTIQ community."

Mr Robertson noted that the Sydney Morning Heraldalso apologised for its coverage but he expressed disappointment at its wording.

He said the Herald's apology did not seem to be unqualified.

'I thought I was going to die'

In just over a week, Sydney's world famous Gay and Lesbian Mardi Gras will once more turn parts of Sydney into a celebration of diversity.

But almost four decades ago, things got off to a very different start.

Peter Murphy was 25 and still struggles to speak about what happened the night after he was thrown into a police van and taken back to the Darlinghurst police station.

"I was singled out and bashed, thoroughly. There were just two police present and only one of them beat me," he said.

"He would have kept going, except the other guy finally said stop.

"So I was convulsing at the time he said 'stop'. I thought I was going to die."

Diane Minnis was 26 at the time, a part of the gay solidarity group.

She described the police as "whaling in" on the that first group of marchers, who became known as the "78ers".

"They were huge blokes and they were just grabbing people, throwing them bodily into paddy wagons and smashing people.

After the mass arrests, Ms Minnis joined a large group of people outside the Darlinghurst police station.

"We sang 'We Shall Overcome' and people that were inside said they could hear it and it gave them some courage.

"But what we didn't know is how badly Peter Murphy was bashed in the cells at that stage."

Sally Abrahams from Yamba in northern NSW was in Sydney in 1978.

She entered several gay nightclubs after the melee broke out and asked for the music to be turned off so she could call for help over the loud speakers.

"I was determined not to be arrested, but my girlfriend at the time, I watched her being bashed and thrown into the back of a paddy wagon," she said.

"I announced what was happening at the nightclubs and asked if there were any lawyers to come and please help us, because there were people being beaten up and harmed, and there were quite a few people who came with me.

"It's worth noting that all of the charges were eventually dropped against everybody because we didn't do anything wrong, it was the police's behaviour that was terrible."

Writer David Marr said he went to the court on the Monday morning following the arrests, which had been barricaded by police despite orders from the magistrate to let the public in.

"It was a wild day on the Monday as well as on the Saturday night," he told 702 ABC Sydney.

Marr, who wrote extensively on the events of that weekend, said the police used paddy wagons to encircle the last of the marchers before beating and arresting them.

"It was the first bit of gay journalism I did and I was terrified even at that."

Mr Marr said that reform, including the legalisation of sexuality, became inevitable after that weekend.

Sydney "could not believe the hate that was in the air that night."

"When the police overstep the mark, they make reform inescapable," he said.

Peter Murphy said he thought the speech and apology was a good step, but it could have gone further.

"The police are only mentioned once," he said.

"It is very important that Parliament makes this statement.

"I'm hoping that this will lead to the police command also making a whole-hearted apology for what took place in 1978, so that we can move past what's clearly a sort of official intolerance of homophobic attitudes in the police force.

"And we will change that culture."