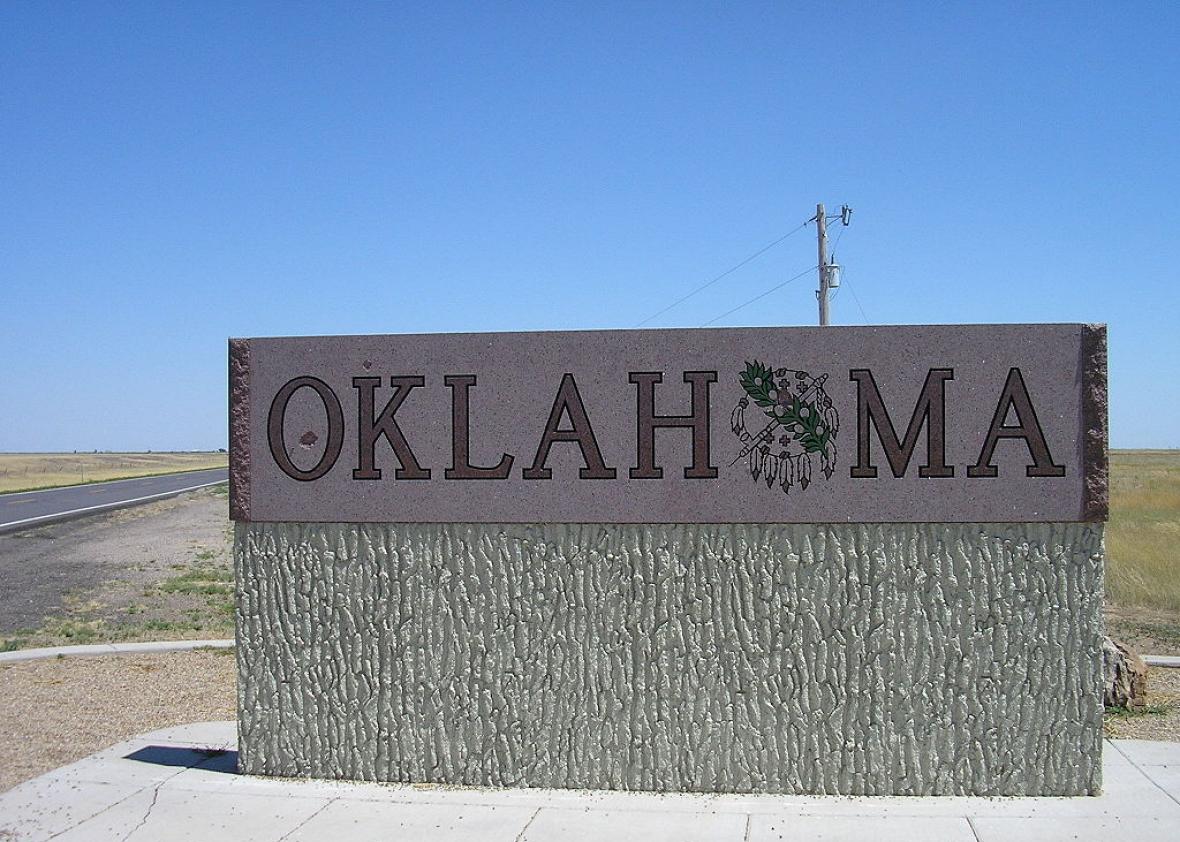 Outrageous anti-LGBTQ bills are now a fixture of the American legislative landscape. At the start of each year, extremist legislators come forward with a slew of discriminatory proposals, ranging from cleverly underhanded to openly deranged. Oklahoma’s latest bills fall on the latter side of that spectrum. In addition to some typical “religious liberty” legislation that would let businesses refuse service to gays—par for the course at this point—Oklahoma Republicans have cooked up some fascinatingly cruel bills. Let’s examine them one by one, ranked in terms of sadistic ingenuity.

This fascinating bill is sponsored by Rep. Sally Kern, an infamously anti-gay representative who once proclaimed gays are more dangerous to America than terrorists. Kern introduced HB 1598.

last year; it passed out of committee but failed to reach the floor for a vote. Now Kern has rolled it over and hopes to push it through.

HB 1598 explicitly states that mental health counselors may engage in “sexual orientation change efforts” with any patient—including those under 18 who are forced into the “therapy” by their parents. The bill also legalizes the use of “aversion therapy” to change patients’ orientation then helpfully lists the protected treatments:

“Aversion therapy” means any counseling by a mental health provider that exposes or asks a client or patient to undergo physical pain, such as electroshock or electroconvulsive therapy, touch therapy, pornography exposure or vomit-induction therapy, in order to change sexual behaviors or gender-identity expressions and/or to eliminate or reduce sexual or romantic attractions or feelings toward individuals of the same sex.

You may be wondering why this bill is necessary, given that there is really no chance of anybody passing anything like a conversion therapy ban in Oklahoma. But there is a method to Kern’s lurid madness: A group of former patients in New Jersey recently sued their erstwhile therapists for consumer fraud—and won. Kern is likely attempting to forestall a similar lawsuit in Oklahoma before it even begins, by explicitly blessing ex-gay conversion therapy as a legitimate, effective form of counseling.

Gay kids raised in anti-gay households face a higher rate of clinical depression, anxiety, and suicide. Homophobic parents already have the untrammeled ability to inundate their children with anti-gay ideology and limit their interaction with gay-friendly people. For these kids, public school counselors provide a critical lifeline, connecting queer youth with LGBTQ groups and gay-affirming therapists—often without the knowledge of their parents, who would surely forbid their child from seeing an enlightened counselor.

HB 3044—which Kern also sponsored—would rip away this lifeline. The bill states that no public school “counselor, therapist, social worker, administrator, teacher or other individual” can “refer a student under the age of eighteen” to any “individual, organization or entity” if the referral “pertain[s] to human sexuality.” In fact, public school counselors can’t even “provide the contact information, business card, brochure or other informational materials” of a gay-friendly organization to students. There’s only one workaround: The counselor must notify the student’s parents 24 hours prior to “making the referral or providing the information.” That notification, of course, would immediately 1) inform the student’s parents that he is gay, and 2) give them an opportunity to forbid their child from talking to any pro-gay groups or counselors.

In other words, HB 3044 is an attempt to keep public school students in the closet, trapped with their depression and confusion, unable to seek help from an adult lest they be outed to their parents. Sensibly, the bill’s reach ends at age 18, when students become legal adults and graduate. But not to worry—Oklahoma has college covered, too: In 2014, it passed a law expressly permitting student groups at public universities to discriminate against gays while continuing to use taxpayer money.

Remember the days when couples had to get blood tests before they could obtain a marriage license? Oklahoma wants to bring them back—with a twist: Anyone found to have “communicable or infectious diseases” will be denied a marriage license. Though neutral on its face, the bill is clearly targeting gays, who still have an elevated risk of HIV.

Can Oklahoma actually do this? Almost certainly not! As the Supreme Court recently reaffirmed, marriage is a constitutionally protected fundamental right; when states want to restrict access to marriage, they need a really good reason. But HIV status is a pretty terrible reason, not least because properly medicated HIV-positive people are typically non-infectious. Moreover, the proposed scheme would conflict with the Americans with Disabilities Act, which protects against HIV discrimination. At least one federal court has already invalidatedpremarital HIV tests on that basis.

What are we to make of these ridiculous bills? Presuming they are not avant-garde performance art—something we mustn’t rule out—I suspect they represent the last gasps of a lost cause. For decades, state legislatures could pass vulgar anti-gay legislation and simply get away with it. Now that federal courts are vigorously enforcing constitutional protections for gays, legislators like Kern are left to impotently rage against the dying of the light. The results are bizarre, humiliating, and pathetic. That, it seems, is what losing a culture war looks like.