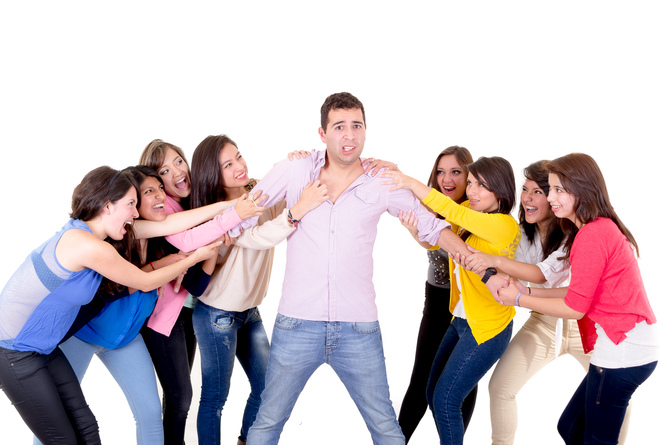 For years, friendships between straight women and gay men have been a subject of pop culture fascination. Books, television shows and feature length films have all highlighted this unique relationship, noted for its closeness and depth.

But with society’s attitudes toward gays and lesbians changing, it’s become all the more important to build a holistic understanding of the relationships between gay and straight people.

As a researcher in social psychology, I’ve often wondered: why do straight female-gay male relationships work so well? Why are straight women so drawn to having gay men as friends? And when do these relationships typically form?

During the course of my research, I’ve discovered that the most interesting, compelling – and, arguably, most theoretically coherent – explanation is through the lens of evolution.

Specifically, I believe evolutionary psychology and human mating can help explain why relationships between straight women and gay men tend to flourish.

At first glance, this explanation may seem quite counter intuitive. (After all, straight women and gay men don’t mate with one another.)

However, this is precisely the reasoning behind my approach. Because gay men don’t mate with women – or compete with them for mates – women feel a certain level of comfort with gay men, and the process of forming a close friendship can occur relatively quickly. With heterosexual men (who, by definition, are sexually attracted to women), the process is longer – and potentially more fraught – because men may be grappling with their own sexual impulses.

In other words, because gay men are attracted to their own gender, they’re a “safe bet” for women – at least, from a sociobiological standpoint.

About three years ago, I initially tested this theory in a series of experiments that have served as the foundation of my research programon gay-straight relationships.

I also recruited gay male participants, and had them complete the same task (with the gay men viewing Facebook profiles depicting a straight female, gay male or lesbian female).

The experiments, published in the journal Evolutionary Psychology, demonstrated that straight women and gay men perceived one another to be trustworthy sources of relationship and dating advice. In other words, when it came to dating-related matters, there was an almost instantaneous level of implicit trust.

Still, more needed to be done to support the hypothesis.

Cracking the why and when

Recently, my colleagues and I at the University of Texas at Arlington developed a series of four related studies.

We titled the four studies “Why (and When) Straight Women Trust Gay Men: Ulterior Mating Motives and Female Competition,” with the hope of better establishing why straight women trust gay men and whenstraight women would be most likely to seek out gay men for friendship and guidance.

For the first study, I wanted to replicate the finding that women trust gay men more than straight men or straight women. This time, however, I wanted to see if women would only trust gay men’s dating-related advice as opposed to other types of advice.

It turns out straight women only trusted a gay man’s advice about a potential boyfriend more than the same advice from, say, a straight man or another straight woman. In other words, it’s not like straight women totally trusted gay men on all matters. It really only had to do with one thing: dating and relationships.

To further examine why this might be the case, we had women imagine receiving information from either a straight woman, straight man, or a gay man about their physical appearance and the dateability of potential boyfriends. We then asked the women how sincere they felt the responses were.

As expected, the female subjects seemed to perceive the judgments coming from the gay man to be more sincere because they knew that he wouldn’t have any ulterior motives – whether that meant wooing the subject (which they might suspect of straight men) or competing for the same romantic partner (straight women).

For the final two studies, we wanted to figure out when women were most likely to befriend and place their trust in gay men. We predicted that this would most often occur in highly competitive dating environments, where a trustworthy source like a gay friend would be valued by women jockeying with one another for a boyfriend.

To test this, we created a fake news article that detailed extremely skewed sex ratios, indicating that women in college were competing over a very small pool of men. We had women read this news article and then indicate how much they would trust a straight woman or a gay man in various dating-related scenarios.

When women read the news article about the increased competition, their trust in gay men was amplified. Not only were women more apt to trust gay men under this condition, but we also found that they became more willing to make gay male friends.

The downside is that if a straight woman values her gay male friends only for dating advice, the relationship could become quite superficial (see Chris Riotta’s essay “I’m Gay, Not Your Accessory”).

However, the strong trust that women initially form with gay men can serve as a primer; eventually, this trust could extend to other areas, with the friendship blossoming over time.

Other findings – combined with our own – show that there seems to be an extremely strong psychological underpinning for why women are so drawn to gay men.

For instance, a recent study in the Journal of Business and Psychology revealed that straight women tend to hire gay men over other heterosexual individuals because they perceive gay men to be more competent and warmer. Furthermore, marketing researchers have suggested that straight women prefer to work with gay male sales associates over others in consumer retail settings.

These two findings alone could have many positive implications for gay men in the workplace. Because many women seem to value input and contributions of gay men in these settings, it’s likely that we’ll see a more inclusive workplace environment for gay men.

Although much of this research focuses on why women are drawn to friendships with gay men, another obvious avenue of exploration is whether or not gay men are similarly keen to form friendships with straight women.

Unfortunately, there’s been very little research on this. However, it’s possible that gay men connect with straight women for some of the same reasons. For example, in a study I conducted in 2013, I found that gay men also look to women for trustworthy dating advice or tips for finding a prospective boyfriend. Other researchers have suggested that gay men value the positive attitudes towards homosexuality that women tend to have (relative to straight men).

In this case, the implicit trust seems to be a two-way street.