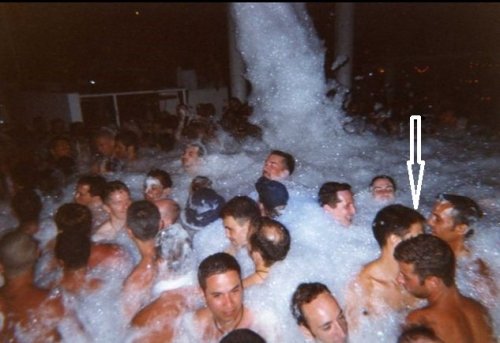 Radar Online is the latest gossip website to bring up old police reports and photos suggesting that Republican presidential candidate Marco Rubio — currently married to a woman, and a father of four — has a gay past.

Radar recently ran photos from the ’90s that a political blogger claims depict Rubio gallivanting at a 1995 gay Miami foam party (though most of his face is obscured.)

Rubio has previously said that he met his wife at a foam party. But, in Miami in the 1990s, foam parties were largely a gay thing, held at big gay clubs like Amnesia.

Does it matter if Rubio is gay, or if he’s previously had gay experiences?

If you apply the traditional gay activist rule of outing someone only if they’ve been antigay in their public lives, then the answer is Yes.

Rubio has stated that federal support for gay marriage constitutes “a ridiculous and absurd reading of the U.S. Constitution,” and has even spoken at fundraisers to advocate gay conversion therapy groups.

But in the bigger, electoral sense, it may not matter.

According to The Washington Post, the Republican establishment is rallying behind Rubio, especially now that Jeb Bush is out of the race.

Nevertheless, he’s got a tough uphill slog to try to beat the juggernaut that is Donald Trump.