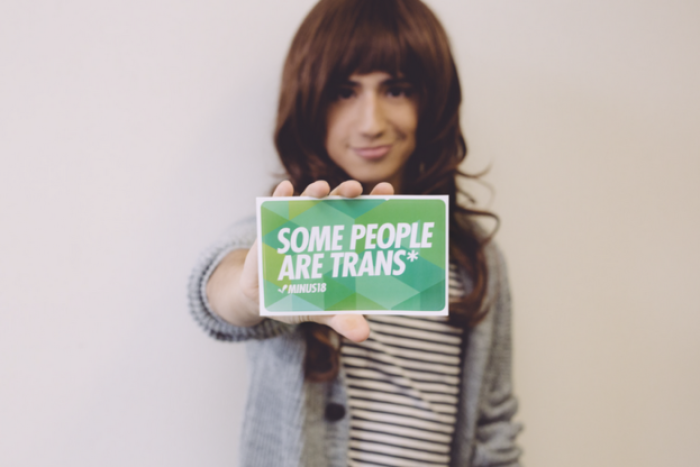 Tawadros's comments were directed at pioneering feminist, academic and author Germaine Greer, who had been asked to defend her long-held views that trans women "are not real women".

In doing so, Greer managed to yet again offend the trans community by saying that trans people "couldn't know" that they were born the wrong sex.

But Greer is not the only person to have offended the trans community, who say slights and casual transphobia appear all too frequently in the media.

So, we decided to compile a guide for those wishing to understand and discuss issues of gender with respect and without inadvertently offending the trans community.

It's not comprehensive, but it's a start.

Head of trans and gender diverse projects at Minus18, Margot Fink, says it's important from the outset to understand what being trans means.

"Part of the problem is that there's so many different ways people can describe it," says Fink.

"One definition that I've found a lot of the [trans] advocacy and mental health support services have started to use, which is quite inclusive and representative, is: 'A person whose gender identity differs from the one assigned to them at birth.'"

2. Why is it so important to use a trans or gender diverse person's correct pronoun?

"The first form of discrimination and prejudice is denial that a group or person exists ... in relation to trans and gender diverse people, the use of incorrect pronouns is seen as that denial," says Transgender Victoria executive director Sally Goldner.

"The best way to ask [a trans person what pronoun they use] is to say something like, 'I'd really like to be respectful and clarify which pronouns you use'.

"Don't say 'preferred' pronoun because then it almost sounds like a choice."

3. Why is it inappropriate to ask a trans person if they've had surgery?

If you wouldn't ask a straight person intrusive questions, don't ask them of a trans person either, says Goldner.

"Would you walk up to a 55-year-old cisgender woman and ask, 'Have you had a hysterectomy?'

"If someone wants to talk about it, in the right place and time, then that's their call, but don't put people on the spot with invasive questions about surgery, about ... what underwear you wear, how you go to the toilet, all those sorts of things.

"Education is one thing, but disrespectful over-curiosity goes too far," Goldner adds. "It's about checking in, it's about consent in a way — not just thinking trans people are there for your amusement."

Fink says questions about trans people's medical history, hormones or surgery often tend to come from an innocuous place, but it's important to remember such queries are incredibly personal.

"You're asking about a person's genitals or body or medical history and that can make a trans person feel very reduced to what's between their legs or even that they're being made a spectacle of," Fink says.

4. Why is it wrong to assume trans people 'become' men or women?

"If you're a 50-year-old truck driver who's had four children with a wife and you decide that the whole time you've been a woman, I think you're probably wrong," Greer said.

But Fink says the assumption that trans identity is something that happens to a person misses the point.

"It's important to remember that a trans person realising or coming to terms with their gender identity can happen at any age, at any time, in any place," Fink says.

"The ways and different forms of coming out vary so significantly and can be stalled by a range of factors, be it safety, acceptance, understanding.

"So when Germaine Greer says things like, 'It's not fair that a trans woman could be married to another woman when they've had kids', that's a hyper-specific example that's not representative of everyone.

"That premise of 'deciding' to be a woman misses the point. Many of us don't have a choice, and that's simply who we are, and that's not a bad thing."

5. What is 'dead naming' and why should it be avoided?

"Dead naming" is where a person's former name or pronoun is used in place of the name they are living as. Numerous media outlets dead named Caitlyn Jenner by referring to her former name and pronoun even after she'd publicly announced her new name.

"Those names, for many people, are a sort of dead, buried part of their identity that can actually represent a lot of pain," says Fink.

"While some people might be okay with it in very specific circumstances ... [dead naming] and using mixed pronouns can actually cause more confusion and misrepresent how that trans person feels about who they are."

Adds Jahshan: "At the Star Observer we only ever use a person's former name if it's absolutely necessary to provide context, otherwise we avoid it as much as possible.

"It can get confusing but just clarifying it with the person you're writing about goes a long way."

6. Why is the term 'cross dressing' offensive?

Using the term cross dressing in place of trans is offensive and inaccurate and should be avoided, says Goldner.

"The problem is that ... people, for example, might say trans people are just men dressing up as women. So it's the idea that [trans] is just a dress-up game rather than an innate sense of self.

"It trivialises it and doesn't represent trans and gender diverse people in the fullest possible way," Goldner says.

"Only ever use the word cross dressing if the person in question has talked about it as something they do."

Adds Fink: "When [trans people] are finally able to wear their own clothes it can be quite dismissive to say, 'That person's cross dressing'. It also mistakes what could be a cisgender person wearing a costume with the experiences of a trans person."

7. Why is it inappropriate to use the phrase 'born in the wrong body'?

A common expression used in stories about trans and gender diverse people is that they were born in the wrong body.

But this is a stereotype that should be avoided, says Goldner, because not all trans people relate to that experience.

"It's not really accurate and puts an emphasis on the body when gender is about a sense of innate self, and about a soul," Goldner says. "Unless someone says they feel OK with [that expression], don't use it."

Adds Fink: "Those are things that some people feel, but they're not actually very representative of everyone ... It's not just about the body and it's usually not, 'Used to be one thing and is now another', it's more: 'I've been this, and now I'm ready to talk about it.'

"There's a sense that [trans people's] gender changes when they get surgery, or when they get particular medical procedures — that there's one moment [when gender "changes"].

"Many people I know have said, 'I've always been the gender that I am, but I didn't [always] have the language or the words to communicate that, and really unpack it'."

8. Is the term 'trans' the same as 'transgender'? Which is more correct?

While the term transgender is widely used and accepted, over time some LGBTI media have evolved their style guides to better represent the spectrum of sex and gender identities. Thus, the term trans is seen as more inclusive.

Says Jahshan: "A lot of LGBTI media outlets have adapted to 'trans' terminology, especially in America they use that, so we've followed in their footsteps.

"In the Star Observer style guide, we only say 'trans' because it's almost like an umbrella term for the range of different gender identities that fall under it.

"The word 'trans' is inclusive; it's sensitive to the community and also doesn't have to specify whether a person is a trans men, a trans woman or non-binary."

9. Why do people get upset when non-trans people speak on the trans community's behalf?

Many people express outrage when public figures such as Greer, who are not trans or gender diverse, are called on to speak about trans issues.

But Fink says the media has a responsibility to ensure trans people are included in such conversations.

"Like we've unfortunately seen over the past few months ... in the media and politics, having theoretical discussions about trans issues without involving people with trans experience themselves has become quite common and becomes very easy to forget that we're talking about a real group of people with feelings and struggles," Fink says.

"By excluding them, it can dehumanise them ... [misunderstandings] ... happen less when trans people are given the opportunity to represent ourselves and address misconceptions."

Jahshan puts it a different way.

"A cisgender woman has absolutely no right to speak on behalf of trans women because their experiences are completely different," he says. "The only thing they really have in common ... is that they both identity as female.

"Seeing someone like Germaine Greer speak about trans issues is the same as when women see men talking about feminist issues ... there needs to be a trans voice or someone to balance Germaine Greer's point of view."

10. Why is important that the media balances 'negative' stories about trans people?

Fink says there is a tendency in the media to only focus on negative or traumatic stories of trans and gender diverse people.

"Being trans in its own right can actually be a really positive and empowering thing, if it's allowed to be," Fink says.

"When you're not balancing stories of suffering with stories of success and happiness, particularly for youth, it makes it very hard to look to the future ... it makes it hard to think, 'Well, if I come out, what's my life going to be like?'

"When I was 10, I discovered the word transgender through [TV shows like] Jerry Springer and NCIS, and trans people were getting beaten up or murdered by their families and for me, that was terrifying.

"I maybe wouldn't have felt so terrified and in denial if I'd seen [in the media] that trans can actually be a very happy and OK thing."